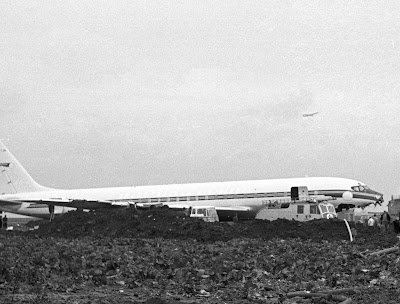 Before stumbling upon these pictures, which I never knew existed, I did have a memory of a Trans-Canada Airlines crash near Heathrow in 1960s. The plane came down in a cabbage field (so my father christened it kapuśniak, 'the cabbagey one', something I remembered). Researching the previous post, I was looking for information on this incident on Wikipedia's entry about Heathrow Airport. Because there were (miraculously) no fatalities in this crash, it was not listed. Today, while archiving my father's b&w negatives, I came across these photos. 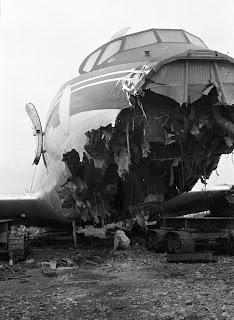 Right: Close-up of the aircraft's nose, with tracked crawlers in place underneath, in preparation for its removal.

The aircraft, a Douglas DC-8-54CF Jet Trader, reg. no. CF-TJM, ship no. 813, crashed after an aborted take off (incident details here). 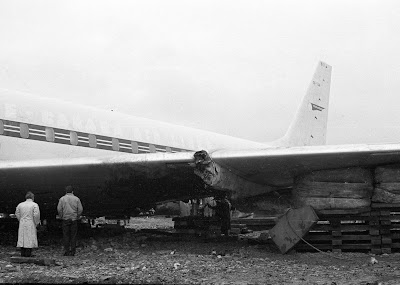 Overnight, the airline markings were painted over and what was left of the engines removed. The following morning, my father (who worked nearby), managed to get close-up to the plane with his camera. 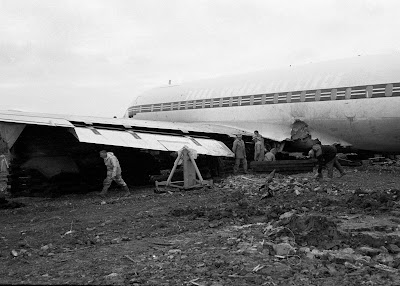 CF-TJM was removed from the crash site and repaired. Trans-Canada Airlines became Air Canada, the aircraft resumed service. Tragically, it crashed again, this time in Montreal, on a crew training flight. All three crew members died. Below. A policeman watches as the airframe is jacked up. 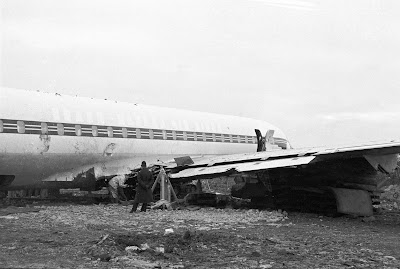 This from FLIGHT International magazine for 28 November 1963:
TCA DC-8 Salvage
The Royal School of Military Engineering were called in to help move the TCA DC-8 which made a crash landing after taking off from London Heathrow on November 6. The aircraft has been towed back to the airport on caterpillar track bogies over a specially laid metal road, and is now in a hangar for a repair survey.
Posted by Michael Dembinski at 16:40

my dad was on this flight. he was telling me a story about how on his 9th birthday he was on a plane that crashed. I just had to find the story and hopefully pictures. thanks much for the posting.

Well,Well, At last some information about that ill fated plane. My wife [pregnant],my 9month son and myself have survived. We wonder how many passengers on that plane have ever flown again ? We came back to Canada by ship..and crossed that Atlantic 5 time by ship since{Expensive}.BUT after 24 years,and much help and encouragement from Lane Daggett[Vancouver Airport Chaplain].Mr Milton [recent President of AC]also helped.We have flown 8 times in 2009. It is not easy-takes a LOT of courage today.
Thanks for these pictures.

I was there in the cabbage field too - my Dad has just sent a couple of colour pics taken before the airline markings were removed. They show a yellow digger some lorries and a caravan, plus a PC armed with wooden truncheon 'guarding' the site.

I was certainly aware of this, even as a 9 year old boy, as I used to go plane-spotting at Heathrow even then!

I've just got hold of an old magazine recording the arrival of a Slick Airways Candair CL-44 that had been charted to the Douglas aircraft company carrying technicians and equipment for the DC-8. That was on 11th January 1964, so the jet must have been in one of the hangars being rebuilt several weeks later.

In fact, my records suggest that I saw this Slick AW plane land at Heathrow. I certainly remember that as my Dad thought we had said 'sick', fearing the worst...

Thank you very much for all these pictures. My grandfather was a flight attendant on that flight, and one of his most famous stories he liked to tell was of course this one. He passed away more than twenty years ago, but the story lives on through my father, who now tells the story as if he was there. We are very touched by your father's pictures. Thank you.

In researching a distant relative who was on this flight, I came across a newspaper article about the crash in the Corpus Christi Times (Corpus Christi, Texas). That article stated there were 3 containers of radioactive materials on board the plane. That's scary.

I was on this crash, traveling back to Montréal
After à busyness trip as a buyer for HOLT RENFREW Store.
I am the one who yell ed “children first”.
Everyone froze until the woman and the kids were evacuated. The panique to run to the one exit where we had to jump in the mud if the field
It was pitch dark and the tower couldn’t locate us. As the right side of the plane was in flames we were tiled to stay together but leave as fast as we could. We are directed in a special room after crossing the departure hall where th waiting passengers were waiting for they’re flights. Bewildered....no cellphones in the 60e so we were all looking for phones...
Well the press found out who I was (well known in those day) and French bilingual.
I was interwied on both main channels, and thanked later by Air Canada For my positive comments about the crew during this event.
I am now 83 years old my name was
Therese Rousseau

Thank you for the pictures.
Memories Memories...
At landing in Montréal the next day the press surrounded me for an interview about this event because I was the only bilingual person they say and well known family in Canada... working for a famous company,