London to Brighton, 45 years ago

November 1965. My father takes me to watch the London to Brighton Veteran Car Run, which is the world's longest running motoring event. (This year's event takes place today, Sunday 7 November 2010, for the 78th time). For some reason I'm wearing school uniform - blazer, cap, woollen scarf and shorts. SHORTS! In this weather? (I can precisely recall the texture of that scarf - especially damp.) 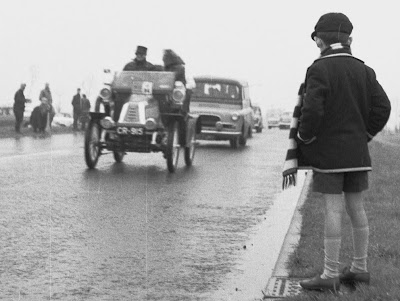 I remember the day as being foggy and damp as we set off from Hanwell for Redhill, where, on the A23 London to Brighton road we watched the veteran cars - all of them at least 60 years old - on their way to the coast. 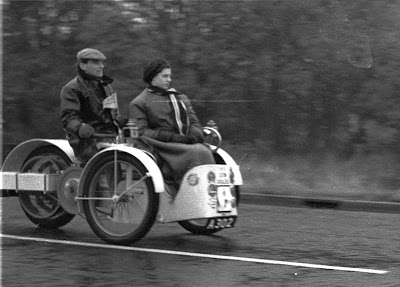 Above: the front seat passenger of this Leon Bollee (A302) looks less than delighted at the prospect of another two hours in the damp and cold, without seatbelts or airbags! Fortunately, these old machines are barely capable of more than 20mph/30kmh. Below: chaps on bicycles follow the cars much as they did in 1896 when the first run was staged, to commemorate the repeal of the Red Flag Act. A 1901 De Dion Bouton darts bravely along. 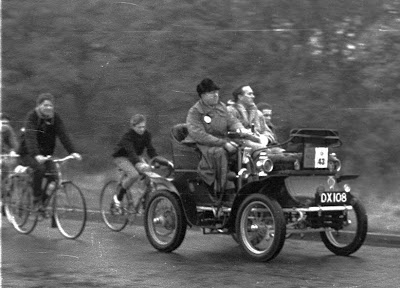 It is interesting to note that the distance in time between 1965 and 1905 (the cut-off date for veteran cars) is the same as the between the earliest Morris Minors and the present day (my father's one was a later version with one-piece windscreen). 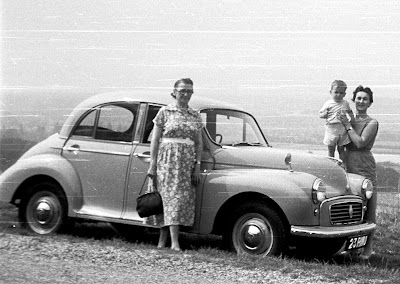 Above: 1958 Morris Minor. In front of it my paternal grandmother, Babcia Stefa, over from Warsaw; me, and my mother. In the background, the River Thames.

All photos by my father, Bohdan Dembinski.
Posted by Michael Dembinski at 00:27

love your pictures!
I would love to borrow your school boy in blazer picture for a post next week. Please let me know, if you are ok with it. Thanks a lot.