La mer, an escape from greyness

In 1967 and 1969, we travelled to northern France for our family vacation. The place - Stella-Plage. As with most things in my childhood, there was a Polish angle. Stella-Plage was a town where many Polish coal miners and industrial workers from Lens, Lille and Roubaix, the economic migrants of the 1920s and 30s, and their children and grandchildren would spend their holidays. The Franco-Poles spoke very little Polish and were culturally, historically and politically more distant from Poland than we, the children of WWII political refugees.

There was a thriving Polish club and church (Stella-Maris), and there was the place we stayed, Maison Maternelle (on Avenue des Plages, between the top end of Boulevard Edmond Labrasse and Avenue Francois Godin), a former maternity hospital, which from the early 1950s on belonged to Polish girl guides (harcerki) - Hufiec Bałtyk.

Maison Maternelle is where we stayed. There were hotel-style rooms and barracks for the scouts, guides and cubs - (zuchy - as I was in 1969). The cuisine was Franco-Polish - garlicky salads and boiled potatoes sprinkled with dill, pureed beetroot, chicken. Milk soup and chicory coffee served in large bowls.

Stella-Plage itself was (and still is - looking at photos on Google Maps Street View) a beautiful small resort on beautiful sandy beaches that stretch on to Le Touquet to the north and Berck-Plage to the south.

My main impression of Stella-Plage (and by inference, France) was la difference. You drove on the wrong side of the road in completely different cars. Citroens (DSs and IDs - low and sleek, 2CVs - flying dustbins, the odd Traction Avant); Peugeots (203s, 204s, 403s and 404s); Renaults (4CVs, Dauphines, R4s, 16s); Simcas (1000s, Arondes, Vedettes). Ah - and the odd Panhard (PL17, 24). All of these cars were then very rare sights on British roads. The UK was not a member of the European Economic Community as the EU was known at the time. Commercial vehicles were different too. Corrugated steel-sided Citroen vans, Renaults, Saviems, and Berliets. So - what was on the road was exotic - as were the roadsigns (quite different to the British ones at the time, before they standardised on the 'continental' ones we now all have).

But it was not just the roads. Everything was different. For a start, France smelt different. Arriving by sea at Boulogne-sur-Mer, the smell of rotting fish at the harbour was overpowering. And lack of proper drains gave the countryside between Boulogne and Stella-Plage a familiar odour that I notice when our septic tank is being emptied. But not just unpleasant smells (though the association with pleasure removed any sense of disgust). Sand after a rainfall. Pine trees in the heat (there's a splendid forest behind Maison Maternelle stretching right the way to the sea). And of course the food and drink. Proper coffee (not the powdered muck the British drank). Fresh baguettes, red wine, overpoweringly ripe Camemberts, vanilla-flavoured icing sugar and liquorice sweets - and Pernod, and creme de menthe. As you walked past the holidaymakers' rooms in Maison Maternelle, you could pick up the smell of Piz Buin and various exotic eaux de parfum.

And shops were different. Peaches, apricots, yoghurts (in dozens of flavours!) and saussicons secs. Hypermarkets in rural Pas-de-Calais when London was only beginning to get supermarkets. Different typefaces, crazy, imaginative typefaces, on the boulangerie, the quinquaillerie, the brasserie, the boucherie - and the cafe tabac, the smell of the newsprint (La Voix du Nord, L'Equipe and those bandes desines for children of all ages) mingling with the distinctive tobacco smoke of Galoises, Gitanes and strong black coffee. All of this as far away from dull old West Ealing as could be imagined by a small boy. And here I could buy les miniatures de Norev. Tiny French cars in 1/87th scale (or 1/43rd with opening doors). Plastic rather than the metal Corgis and Dinkys I played with at home, but exotic and collectable. Most of those cars listed above I had in 1/87th scale as little models in little plastic boxes.

And visual difference. Just 22 miles across the English Channel, 20 miles south of Boulogne, the climate was so different to that Miserable Grey Little Island across the water. The sky was dazzlingly blue. Children would get nosebleeds from the heat. And the architecture. Not England's oppressive Victoriana with its fusty gas-lit strictures, but airy moderne houses built so that their owners can enjoy the sensation of sun and sea on their skin.

My childhood seaside experiences had been limited to places like Eastbourne, Bognor Regis or the Isle of Wight. Pebbly beaches, close, wracked, pooled; Stella-Plage's beach was endless clean white sands dotted with sand yachts and WWII German bunkers. For 10 year old boys, this was heaven. And the pommes-frites stand by the beach. 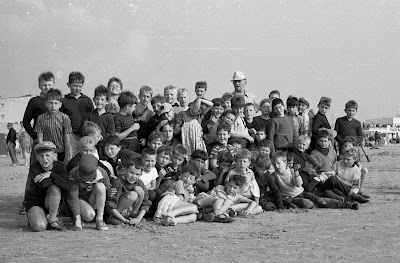 Above: Polish cub scouts, or Zuchy, in Stella Plage, 1969. So many familiar faces! There's my brother in there; and there's blog commentator AdtheLad, plus ace photo artist Rysiek Szydło - and do I see the managing partner of PwC's Warsaw audit practice here as well? And my parents' dentist, ah - and there's Stan!

The hinterland behind Stella-Plage, Cucq, Trepied, Rang-du-Fliers, I'd later explore on future trips as a teenager and young adult. I've not been back here for 30 years, and would love to return. 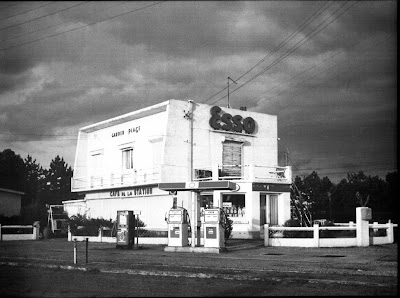 Above: Petrol station, between Stella-Plage and Merlimont Plage. Today, a private house (below) photo courtesy of Google Maps Street View. 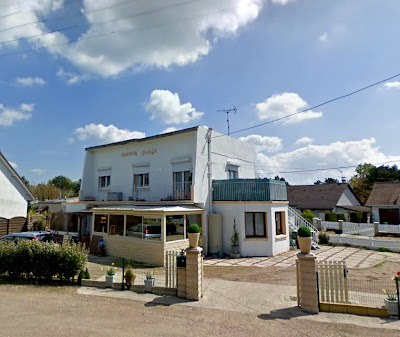 Childhood summer holidays would be over all too soon, and we'd return by British Rail Ferries to Dover; as the ferry berthed in the dock, I'd see a red phone box and a helmeted (and unarmed) British bobby and feel a mix of reassurance at returning to the certainties of British Democracy but a twinge of regret of leaving somewhere so exotic and exciting as France was then.

Today, signage right across Europe is one variant of Helvetica or another; cars are all the same everywhere, the same shops (pretty much) appear in the same malls. One homogenous sameness - the price one pays for economic progress. You can drive from northern France, through Belgium and Holland into Germany and not see a tad's difference. What a shame.

And yet... and yet. Having writing this post on a hot July night, it all comes back to me with a freshness, a lingering ambience, spirit of place. By way of afterword, the morning after writing, I step out onto our sunny balcony overlooking Jeziorki and am still there in my mind enjoying summer in the Pas-de-Calais.

Maybe it was watching the sun set over the English Channel as a nine year old boy that the conscious search for the Sublime Aesthetic began...

Posted by Michael Dembinski at 23:40

I think there are still some subtle differences as you travel through Europe. Something to do with smells and colours and the type of snack foods on sale in service stations. Tiles and blinds instead of carpets and curtains.

However I don't feel that I'm really living 'abroad' in Brussels. It's not as atmospherically and culturally different from the UK as Poland is. I remember getting the tram down Krolewska/Karmelicka on my first morning and that was exactly what struck me: different fonts on the signage, different colours, those low grey bloks that aren't really kamienice. Possibly a kind of misplaced nostalgia evoked by the subtle 1980s flavour of everything.

Thank you to whoever forwarded me the link to this blog. What a nostalgia trip for me - the photo of 'Sledz' with the zuchy on the beach at Stella reminds me of a truly exceptional person - and in my opinion sadly unrecognised by modern UK Polonia - a man with a gift for getting the best from youngsters, and for whom I think all of London's and UK's Poles had serious respect.
Nevertheless where are the wodzowie on the photo?

Michael(Michal?) - I'm not sure if we ever met but I largely share your background and was wodz zuchow of 'Jedynka' (Gromada Goralow) in the early 70's. We were regulars at maternelle. Unfortunately I think I was a disappointment for "Sledz" as in my last year on kolonia in 1972? (actually not for the first time) I had to explain why there were two one-litre bottles of "Facon Biere de Luxe' buried in the sand under my tent in the "duny". I never found out who grassed me up.
I have been back to Stella many times since. I would recommend to you if you have not been there for 30 years - do not go. You will be saddened if not enraged.
Stella Plage has changed beyond all recognition. The coastal road from Le Touquet is now lined with condo's; on the seafront the old bunkers have gone:-do you remember the one in the big square just back from the beach? - well that is now a block of apartments. There is a concrete esplanade. The duny - do you remember the old Polish eccentric who lived in a shed and drank 'gorzalka'? - all villas now. The old German inland batteries are ploughed over and developed. When I was last there for the Sunday market behind the church which used to be all local produce viz. unpasteurised milk, local cheese etc etc, it was all tourist tat.
I have a real soft spot for Stella. I've holidayed at 'ksieza", stayed in rented accomodation, with friends etc. This summer I'm going again for a long weekend, but you can bet that i will spend the whole time complaining how it is not the same Stella I remember with so much affection from my teenage years...

Thank you for evoking those memories shared by so many Londoners. I started going to Stella at the age of three with my “Tato", “Sledz”, (thank you for the commendation, Starykapral). Like so many of us, I kept going back mostly as a teenager.
As a child I remember the long trek to the beach along the sandy road through the village. This effort was hugely rewarded by the joys of the beach, swimming and then the jam sandwiches flavoured with a hint of sand.
In the late 70s, I went to visit my son when he was there at the age of six, with his “Dziadek”.
Imagine my surprise to find that my mother would ferry the “zuchy” to the beach in her red Renault 5 (I think she managed to cram in at least a dozen at a time). But then anything was possible when we were young!