At this cold time of year, I think back to my childhood years, when houses were not centrally heated. Compared to our present house in Warsaw, constructed of thick airbricks and clad with 15cm of expanded polystyrene (then plastered on the outside), pre-war British housing stock was not built to keep warmth in. Drafty single-pane windows didn't help much. But as London was rarely visited by frost, this did not matter much as it does here.

But when it was cold, you'd feel it in the house. Our house on Croft Gardens was warmed by open electrical fires, three-bar heaters. These would be switched on non-stop during winter evenings, heating the front room (where the TV was). Stepping out into the corridor was cold and unpleasant, as was getting changed into one's pyjamas in a cold bedroom. Worst was washing in a cold bathroom. Here, because of risk of splashing water onto the open heated electrical elements, we'd have an upright paraffin heater (Aladdin brand, made on a factory on the A40 in Greenford). The paraffin heater would use either pink or blue paraffin (boom-boom-boom ESSO BLUE - remember the TV ad?), and a wick would have to be lit by a match or lighted taper. Or a large, cylindrical battery, striped blue and white (EverReady?) with a long chromed metal tube with a sparking device at the end. The Aladdin factory is still there on the A40, a listed building, though many decades have passed since it last made stoves. Latterly, it was a B&Q superstore, before that closed. 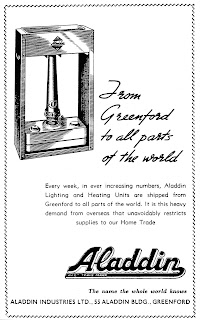 The paraffin used to fuel the stove was bought at hardware stores that vaguely smelt of the stuff. Hardware stores, before going the way of haberdashers and fishmongers, were staffed by knowledgeable chaps called Reg or Alf, who wore light-brown warehouse coats, and knew whether you needed a 7/16th" Armstrong-threaded nut or how much creosote you'd need for your garden fence.

I would often accompany my father to the hardware store on the Hanwell-end of the Uxbridge Road in West Ealing, metal cannister in hand, to buy two quarts or so for the bathroom heater.

The burning of anything by smokeless coal in the fireplace had been prohibited by the Clean Air Act of 1956. On every single lamppost there was a note to this effect. The coalmen would call regularly on Croft Gardens (we never burnt fires in the fireplace, considering this old-fashioned, grubby and working-class). The coalmen would arrive in a lorry carrying scores of hundredweight bags of smokeless nutty slack, neatly arranged on the open flatbed. A coalman, as black as a miner, would heave the bag onto his back (he had a special hat with a leather apron protecting his neck and shoulders) and carry it into the back garden. Most houses, including ours, had a coal bunker, used for storing solid fuel. Ours, however, was half-full of sand, and a great place for games of hide-and-seek.
Posted by Michael Dembinski at 08:03

Goodness me, you kept this blog quiet!

I shall have to read everything just to catch up now. You were born only 2 years before me and lived in pretty much the same part of London - we were in Kingsbury, Kenton & Harrow - so this will be very relevant.

Wish my memory worked half as well as yours does.

Your upbringing is very reminiscent of mine (born 1954 and brought up in Woking). We too had an Alladin parafin stove but it was in the hallway, and yes, we would go down the hardware shop with our Esso Blue can where 'Alf or Reg' would fill it up from a large tank.

Our main heating was in fact a coke fire in the front room, and otherwise we had to use portable electric heaters which weren't very good at spreading the heat!

I remember we bought one at the Co-op in the early sixties which reminded me of the top half of a Dalek! Probably around 1968 we had a wall-mounted electric heater for the bathroom which was great!

In the winter, the gas rings gave a good heat in the kitchen.