The Continental Travels of EKX 604 B

I have mentioned before (on my other blog here) our family visits to Cold War Poland in the 1960s; there were two trips - one in 1961, when I was but three, and one in 1966 when I was eight and my brother three. This post is in praise of our family car that in July and August 1966 transported us to Poland and back. Below: That's me touching the roof rack, my brother crouching and my cousin Hania to the left. Somewhere near Bystrzyca Kłodzka, south-west Poland (close to the Czechoslovak border). 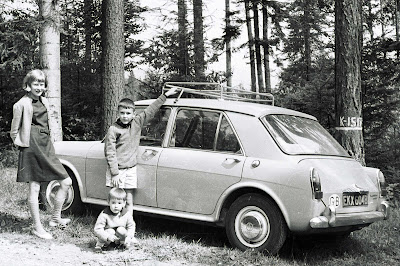 My father's car, a dove-grey Morris 1100, EKX 604 B, performed admirably, getting us there and back safely (despite lack of head restraints, airbags, crumple-zones, rear seatbelts, anti-lock brake systems etc). I recall one hairy moment - after a night in West German hotel, my father set off the next morning onto an entirely empty road - on the wrong side. An oncoming car promptly had us swerving off back into the right-hand lane! Our journey to and from Poland took us from Ostende, through Belgium, West Germany and Czechoslovakia. My father had an AA Continental Route Planner, which set out the entire route with great precision - down to the last roundabout and roadsign. 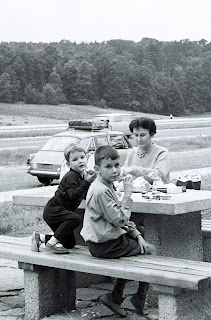 Left: West Germany's autobahn network allowed us to cover the stretch between the Czechoslovak border and the Rhine rapidly. There were parking areas where we could eat food that had been prepared for us by our family in Bystrzyca. I recall in one such area, we found a tin but no tin-opener; my mother suggested I go up to a truckful of American GIs. They were amazed to hear English spoken to them by a boy with a British accent; the truck was huge, the men were huge - tall, fierce-looking, with large hands; several were black. The tin was returned to me opened. 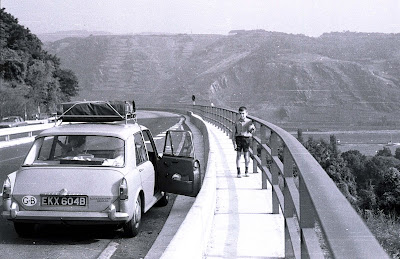 Above: overlooking the Rhine. I have very pleasant memories of this part of the journey - both going out and coming back - West Germany in the middle of its wirtschaftswunder, prosperous, clean - and not a visible trace of its Nazi past. We passed through Mainz, Cologne and Bonn. 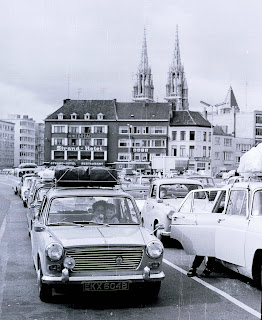 Right: waiting for the ferry to Dover at Ostend. Most of the cars in the queue are British - Austins predominating - and a Bedford Dormobile at the back there, the '60s equivalent of a people carrier. There were fewer continentals keen on visiting England than Brits keen of visiting the continent!
Posted by Michael Dembinski at 22:45

How did you find Poland during your second visit (in 1966)? Were there many things that shocked or surprised you?
Anyway, your family's trip was an amazing feat!