The joy of a toy

Die-cast metal toy cars were the quintessential toy of my childhood, along with Lego bricks and plastic model kits that needed sticking together. I've written about the latter two here and here. Essential to my desire to own more and more toy cars (I had over 100 when we moved from Croft Gardens to posher Cleveland Road at the end of my Grey Jumper'd Childhood) was the catalogue.

At the time, the two main brands were Corgi and Dinky. These toy cars were generally 1/43rd scale. Smaller in size were Matchbox toys, a third staple of my car fleet. From time to time I would get a Spot-On car or Budgie (Dinky/Corgi size) or Husky (Matchbox size). There are many websites showing photos of the toys themselves - but if you're my generation, beware - going to these sites may well result in a serious loss of time, spent wading in purest, golden nostalgia.

The joy of getting my little hands on the toy car was heightened by the anticipation, which began by hours-long gazing at the catalogues, which Corgi, Dinky and Matchbox published annually. The 1960s, my childhood decade, was a time of rapid innovation in the toy car market. From toys that offered no more than rotating wheels, rubber tyres and plastic windows that I'd play with in my earliest childhood, to fully-featured toys with opening doors, bonnet and boot revealing a detailed interior and engine bay, each new catalogue brought with it a wealth of new expectations. 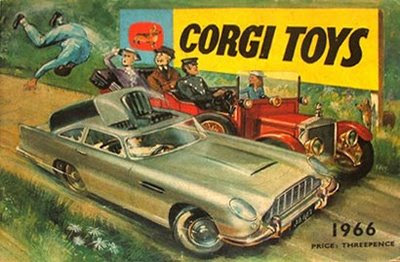 For the toy to bring hours of pleasure to me, it needed features. And the very apex of die-cast toy sophistication for me was the Corgi Toys James Bond Aston Martin DB5, which helped make the Christmas of 1965 the best ever of my childhood. Another was the Corgi Toys Mini-Cooper Magnifique, released in 1967. My urgent fingers would open and close the doors, tip forward the seats, slide the sunroof, examine the engine - and prepare the car for long-distance journeys.

Yet thinking back, it was catalogue-gazing that brought me most pleasure. The joy was in the anticipation, imagining how it would be to open that box and to wheel out those four ounces of metal on four rubber tyres and push them around the floor.

Posted by Michael Dembinski at 18:54