One of my bon mots about my 'privileged' childhood was that the ice-cream van that plied our posh upper-lower-middle class streets would chime the waltz from Gounod's Faust. Many's the time I told this anecdote to peals of laughter from my listeners, who thought I'd devised the most capital conceit.

Not so. The ice-cream van doing its rounds on hot summer days in Hanwell, London W7, did indeed play the waltz from Gounod's Faust. Messrs Page and Bryn's excellent 'Google' device enabled me to find this newspaper article from 1954 (in the decade before my earliest memories were shaped). 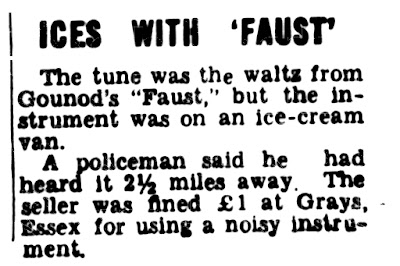 Greys in Essex lies 30 miles to the east of Hanwell. The article harks back to a happier time when PC Plod had little better to do than to track down and persecute ice cream vendors for their over-enthusiastic musical self-promotion.

For many years, this particular music was lost in the folds of my hippocampus; until that is Classic FM burst onto the airwaves of British radio. Classical music had hitherto been the exclusive, nationalised, domain of BBC Radio 3; a dreadfully elitist station dedicated to playing none but the most abstruse of orchestral pieces by Pierre Boulez, Karl-Heinz Stockhausen, Penderecki and other pots-and-pan merchants. Classic FM, 'a ghastly descent into populism', would frequently play the waltz from Gounod's Faust, and at last I was able to discover the name of the tune that would herald the approaching ice-cream van. Here it is, below, click to listen.

Posted by Michael Dembinski at 15:22