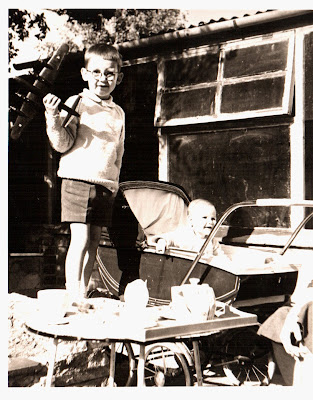 From the day my father bought me my first Airfix kit (Supermarine Spitfire Mk IX, JE*J), sometime in the spring of 1963, I was hooked. Making plastic models of aircraft would be something I'd be up to for the next decade or so. I recall the day. We'd gone to the see the parish priest at Andrzej Bobola Polish church in Hammersmith about my brother's forthcoming christening. Rather than going straight home, we drove to Bushey Park, where, in the car park, my father presented me with the kit. It was in a brown paper bag; inside was in a clear plastic bag with a card stapled the top with an illustration of a Spitfire. The kit itself was of pale blue plastic. Wings, fuselage halves, ailerons, wheels, etc, were attached to sprue, there was a set of transfers with the RAF roundels and a clear plastic hood. 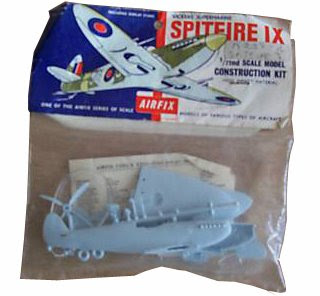 I'd guess my father made the kit, but he showed me how to do it. After a while I was sticking them together with aplomb. At the time there was no mention of solvent abuse, but I'm sure there was something about those fumes from the polystyrene cement (larger kits had little browny-yellow capsules of glue with them). Also, I can't remember whether JE*J (the plane of ace fighter pilot 'Johnnie' Johnson) was ever painted or whether it remained pale blue with transfers applied.

Towards the end of that summer, making plastic kits had become my favourite pastime. Well, that and building things out of Lego. One day, my father took me to Woolworths. I was very keen for him to buy me an Airfix kit of the North American Harvard, like the Spitfire, Series I, costing all of 1s. 11d., and moulded in bright yellow plastic. My father offered to buy me an Avro Lancaster bomber. Series 5 (. Four engines! Moving turrets with elevating machine guns! Functioning ailerons, elevators and rudders! Rotating undercarriage wheels! Which to choose? The Lancaster was a kit bigger and more sophisticated than any I'd helped build before. So I chose the Lanc, though I was a bit sad that the bright yellow Harvard was not to be mine.

Above: That's me proudly displaying the finished Lancaster kit ('G' for George), one fine September day in our back garden in Croft Gardens. My brother is in the pram (the wheels of which would end up as the starring stage prop in Class 3V's production of Chitty Chitty Bang Bang five years later). My mother's hand is by the tea things. Behind us is the summerhouse, full of things like a wind-up gramophone, old furniture and other discarded items. The putty on the summerhouse's glazing was forever falling off (or picked away by little fingers). And note the crease in my grey flannel school shorts.

Incidentally, from what my father told me, the previous owner of our house on Croft Gardens, a Mr Appleby or Applegate, was an RAF navigator flying Lancaster bombers. We used to have a large, heavy, grey compass that came from one in our veranda. The insides were painted black and a luminous needle would wobble around inside.
Posted by Michael Dembinski at 19:56

My Grandfather has Johnnie Johnson's signature on a golf score card. He met him on the links and they got to chatting about the good old days. Grandad worked for DeHavilland during the war on the development of the Mosquito. I went with him to the DeHavilland museum at Salisbury Hall a few years ago and he showed me the bright yellow prototype Mosquito and the place where he had patched a chunk of plywood over an instrument port that was no longer needed. Talk about history coming alive!

Ah now! the Mosquito... 633 Squadron and all that... Pop into your local Salon Prasowy, EMPiK or other decent Polish newsagent for the latest DeAgostini partwork "Samoloty II Wojny Światowej" - DH Mosquito FB Mk VI, in 1/72 scale. Ironically, made of metal, rather than wood.

Yellow prototype... this one?