Holiday on the Isle of Wight.

Sitting here by the computer, I just had an involuntary, entirely spontaneous flashback, a propos of nothing at all - a childhood holiday on the Isle of Wight. Bembridge. August 1964; my brother would have been one and half, me, I'd have been six and a bit.

I remember the village, its green, our rented holiday house just off the green; Southern Vectis double decker buses, light green in colour. I remember the lead paint scare; toys made in Hong Kong (for that is where cheap toys came from - the euphemism was "Empire Made") that had red paint on them were so full of lead that if you sucked them (so my mother said), your brain would come to a standstill.

The double deckers were an attraction to me. Because we were middle class (just!) and had a car, I very rarely travelled by public transport, and so, a bus journey was an departure into the exotic. During this holiday, I once went by bus with my father, just a few stops, upstairs of course, on the top deck, which was very exciting. I remember the harbour, the smell of the sea; the weather was nice, too.

We drove all over the island - Blackgang Chine, Alum Sands, Ventnor, Ryde... at Cowes, we saw, across the water, the gargantuan bulk of Britain's largest flying boat, the Saunders-Roe Princess, in mothballs, awaiting the scrappers' blowtorch. 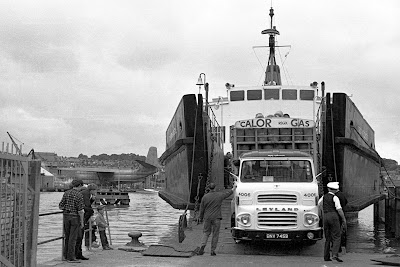 Above: What's brown and comes steaming out of Cowes? The Isle of Wight Ferry. Its load here - a new Leyland truck bringing Calor Gas the the island's caravanners. To the left, in the distance, the cocooned Princess. 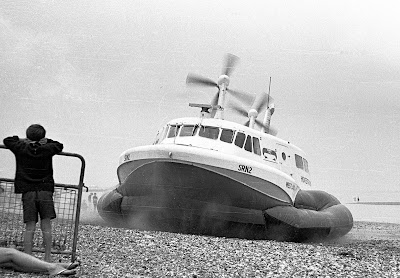 Above: A more modern way (well, in 1964 at least) of getting to the mainland - a Saunders-Roe SRN2 hovercraft makes it up Ryde beach to unload passengers. That's me covering my ears. As well as being extremely loud, the hovercraft's air cushion would blow sand and grit at high velocity, stinging the skin. Both pictures by my father, Bohdan Dembinski
Posted by Michael Dembinski at 22:55

Blackgang Chine veteran, summer of 1980. I got locked in the Cowboy Town jail with our scary maths teacher (who, according to legend, flew Submarine Seafires off of HMS Furious during the war.

Do you remember London Underground trains on the Isle of Wight?